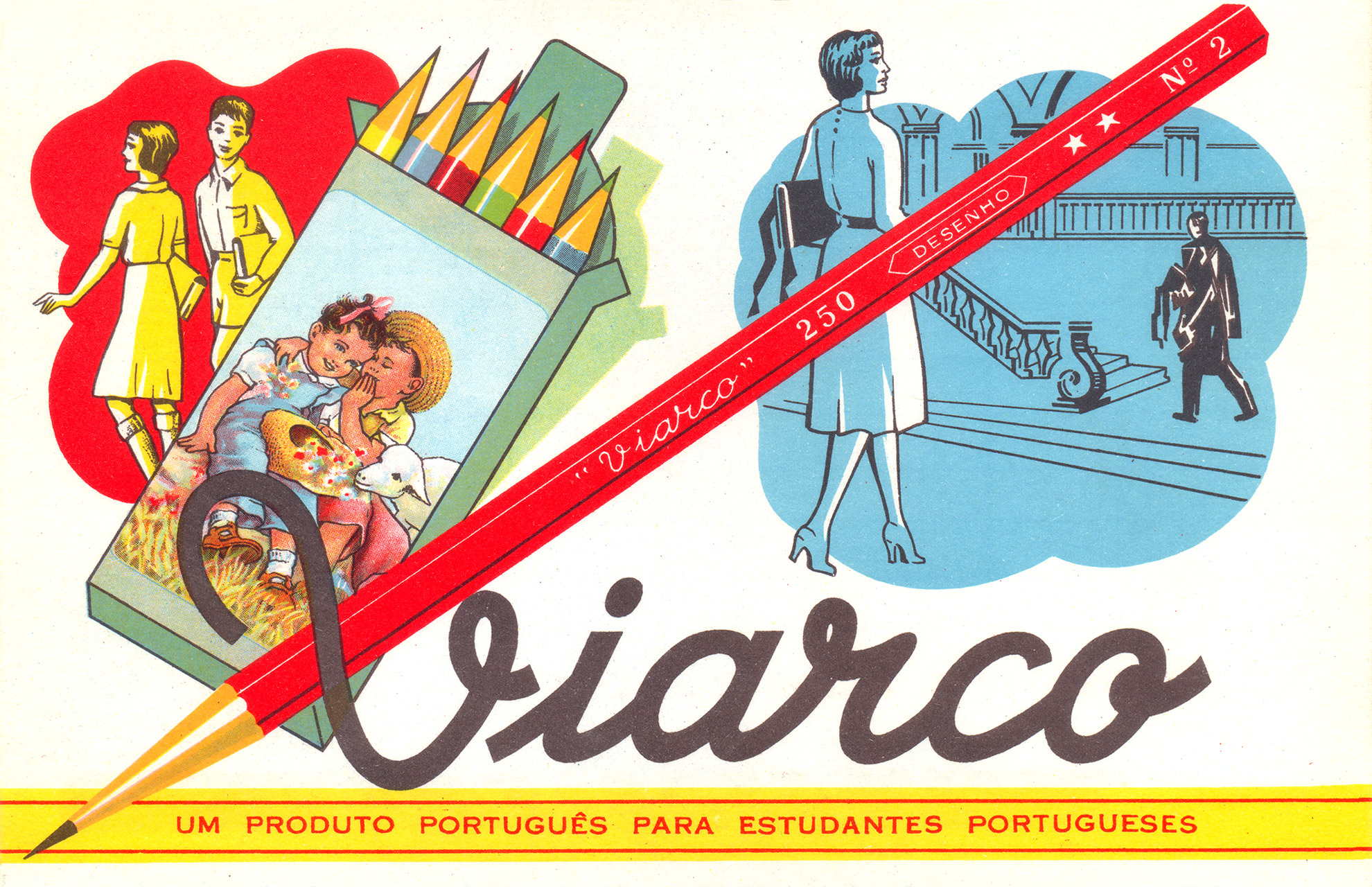 Establishment of the Fábrica de Lápis Portugália, by Conselheiro Figueiredo Faria and Engineer Jules Cacheux, in Vila do Conde.

Bankruptcy of Portugália and its acquisition by Manoel Vieira Araújo.

Relocation of the pencil factory from Vila do Conde to São João da Madeira.

Beginning of the production of crayons.

Discovery of the watercolour graphite, by António José Vieira Araújo Araújo in a partnership with José Emídio.

“Viarco 70 anos”exhibition, in a partnership with Maus Hábitos.

“O Espírito do Lugar”exhibition, by Pascal Nordmann, in a partnership with the Art Centre of São João da Madeira.

Beginning of the Viarco Express, project, in a partnership with Maus Hábitos.

Exhibition and reedition of old packages, in a partnership with “A Vida Portuguesa”.

Drawing Experience exhibition, in a partnership with the Designer Miguel Vieira Baptista.

“Riscos e Rabiscos“exhibition, at the Municipal Library of Carnaxide, Oeiras.

Registration of the ArtGraf brand.

Release of the book “Histórias do Lápis Mágico” at the International Comics Festival, Amadora.

Opening of Viarco’s Atelier, with Ricardo Pistola and Pedro Alves.

Beginning of the partnership with ESEIG with the Viarco awards.

Extension of the ArtGraf range. First international experience under the Viarco and ArtGraf brands at Tent London.

“Atelier Viarco” exhibition, led by Ricardo Pistola with the participation of Mafalda Santos and Mariana Moraes, in a partnership with Maus Hábitos.

Participation in the Experimenta Design ‘EXD09’.

Release of the Turn it pencil, authorship of Miguel Soeiro, selected at the POP’s from Serralves.

Participation in Zona Tortona at the Milan Design Week.

Beginning of the partnership with ColorADD, and release of the first pencil box with colour identification code for the colourblind.

Viarco’s transition to the 4th generation of the family.

Release of the Stenced Pencils, Break to Sharpen, and Dummy pencils, selected at the POP’s from Serralves.

Beginning of Viarco and ArtGraf brands’ distribution in the United States.

“Viarco Express” exhibition at the Almeida Garrett Library in Porto.

Artistic Residence from Richard Câmara and Marco Moreira, in a partnership with the city council of São João da Madeira.

Release of the VHILS, coloured pencils box, numbered and signed edition, in a partnership with Montana Shop.

First participation at the Paperworld in Frankfurt with Viarco’s own space.

Beginning of the Viarco and ArtGraf brands’ distribution at the Asian and Australian markets.

Release of the ArtGraf Tailor Shape in earth tones.

Finalist with ColorADD in the Co-Criação project for a more inclusive society in Zermatt, Switzerland.

Open day Viarco, with the closing of the Viarco Express project, meeting of Urban Sketchers, and concert of the Creative Orchestra from Sta. Maria da Feira.

‘Under Construction’ exhibition by Ricardo Pistola in the Viarco Gallery, Cidadela de Cascais.

Artistic Residence from the collective “Tempos de Vista” and “Circuitos de Repetição” exhibition, in a partnership with Oliva Creative Factory.

“Made in Portugal” exhibition with the ColorADD, at the Design and Fashion Museum, Lisbon.

Companhia Persona presentation of Azert, concert/performance at Viarco, as part of the 4th anniversary of Turismo Industrial

Article publication about Viarco in Slantedmagazine.

Artistic Residence from the Morphe collective, in a partnership with Oliva Creative Factory.

Transmission of the second episode of the 10th season of the program Isto é Matemática, recorded at Viarco and presented by Rogério Martins.

Launching of the Morphe, Una, Dupla and Nora drawing tools and the Viarco Vintage Collection box, reissue of 6 packs from the 50s/60s.

Viarco selected in the Raw Bible, a manifesto of quality, passion and craftmanship, published in Germany, brings together 101 raw brands that preserve its history.

Exhibition “Rainha das Cores” at Viarco in partnership with Bichinho do Conto.

Transmission of the Viarco episode in the “Fabrico Nacional” program of RTP1.

First participation at Maison Et Objet in Paris with the presentation of the RISKO Drawing Desk in prototype phase.

Presentation of the RISKO prototype at the London Design Fair, with Associative Design.

Launch of the RISKO Drawing Desk V1 at Creativeworld in Frankfurt.

Presentation of RISKO at the Stockholm Furniture & Light Fair in Stockholm, with Associative Design.

The ArtGraf and Viarco products as a support for “48H a Desenhar”, at Vila Nova de Gaia.

Interview with José Vieira about Viarco on the Portugal Ventures platform.

Participation at the 12th Drawing Now Art Fair in Paris.

Transmission of the 13th episode Literatura Aqui IV about the Poetry to the Table that counted with the participation of the employees of Viarco, in RTP2.